RCB is one of the strongest teams in the Indian Premier League (IPL) that plays for Bengaluru and owned by United Spirits. In the year 2008, the team was lead by Rahul Dravid. In the 1st year of the IPL, they played 14 matches among which they only won 4 and ended up in the 7th position due to this they were not in the finals, but the appreciable thing is that they played finals for the next year (2009).

RCB was finalist for three times in the IPL but unfortunately they lost all of them.

In the 2nd half, JH Kallis and MK Pandey were openers for the RCB and their partnership didn’t work, they together scored 19 runs. After the wicket of MK Pandey RE van der Merwe took the charge and scored 32 runs, after that no one played well and wickets were fallen continuously. They struggled a lot to score 129 runs from 19 overs, in the last over they need to score 15 runs to receive the trophy but they scored 8 runs that led Deccan charges to win the trophy.

In the 2011 IPL final, the match was with Chennai Super Kings, this time the team was lead by Daniel Vettori having a squad Mayank Agarwal, Chris Gayle, Virat Kohli, AB de Villiers, Luke Pomersbach, Saurabh Tiwary, Abhimanyu Mithun, Zaheer Khan, JS Mohammad, Sreenath Aravind. The match was in RCB’s home ground i.e., Chinnaswamy Stadium, Bengaluru and CSK won the toss and opted bat first, in the 1st half of the match Murali Vijay scored 95 runs and Michael Hussey 63 runs this made a very good partnership and this helped CSK to have a big score of 205 with a loss of 5 wickets.

In the 2nd half, Mayank Agarwal and Chris Gayle were openers for RCB, Mayank Agarwal scored 10 runs whereas Chris Gayle was out for zero runs, this was the bad impact and led to struggle in the middle order. After that ABD and Virat Kohli also didn’t work well and ended up with 147 runs with a loss of 8 wickets where CSK won by 48 runs and received the trophy.

In the 2016 IPL final, this time the team was lead by the run machine Virat Kohli and also there were many changes in the squad- Chris Gayle, AB de Villiers, Lokesh Rahul Shane Watson, Sachin Baby, Stuart Binny, Chris Jordan, Iqbal Abdulla, Yuzvendra Chahal, Sreenath Aravind. The match was in the Chinnaswamy Stadium, Bengaluru as this was home ground RCB there were huge hopes on RCB. SRH won the toss and opted to bat 1st, David Warner and Shikhar Dhawan made a good partnership and also in the middle order Yuvaraj Singh and Ben Cutting also played well that made SRH to have 208 runs with a loss of 7 wickets in 20 overs.

To beat this big score RCB was ready and well planned, Chris Gayle (75) and Virat Kohli (54) were openers and made a very good partnership of 130 runs very easily but V Kohli gave wicket to Barinder. And all the wickets were fallen, in the last over Abdulla and Sachin Baby were batting they need 18 runs to win the match but they scored only 9 runs (200-7). So SRH won the match and received the trophy 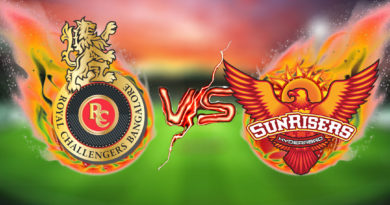 SRH vs RCB head to head in UAE